If you’re travelling to Japan, the chances are you will visit at least a couple of sites significant to the country’s native religion Shinto.  We visit the Fushimi Inari Shrine in Kyoto (or ‘the one with all the red gates’) and the Itsukushima Shrine on Miyajima on our Japan tours.  Here we bring you a quick guide to the religion, so that you can make the most of visiting these beautiful and fascinating landmarks.

Shinto means ‘the way of the gods’ and can be traced back to the beginnings of Japanese civilisation. Practice revolves around the honouring of kami – spirits believed to possess or inhabit objects or natural landforms.  Points of connection between the spirit world and the human world (most often unusually shaped rocks, rivers or trees) are housed within shrines.

Japan has always been a particularly secular country and currently less than 40% of the population identifies with an organised religion. However, on public holidays many people, (including atheists) choose to visit a Shinto Shrine – jinja –  or a Buddhist temple – otera – to honour their cultural heritage.

How is Shinto practiced?

Shinto practice focuses on the way that people interact with their surroundings while they are alive rather than preparing followers for an afterlife.  The practice is, for the most part limited to a series of practical rituals. The standard ritual, performed by visitors to Shinto shrines is as follows:

How to spot a Shinto shrine

Shrines range hugely in terms of size and grandeur but there are a few visual signifiers to help you spot them while you’re in Japan.

People often leave offerings of fruit, sake and other consumable items at the foot of shrines.

These long white zigzags made of paper typically hang from shrines. They are also attached to wands or haraegushi during Shinto ceremonies.

These striking red gates are the most recognisable feature of a Shinto shrine – there’s even an emoji of one! ⛩

These stone statues are usually located at the gates of a shrine, typically examples of these statues are lion-dogs, or shishi and foxes, or kitsune. 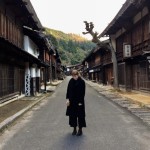 Poppy is a born and bred Londoner but her heart belongs in Tokyo. She recently graduated with a Master’s degree in Japanese Studies and hopes that she can share her love for Japan through her work at The Dragon Trip.

Everybody knows about Japan's beautiful sakura season, but did you know that other countries have their very own cherry blossoms? The delicate, pastel flowers blossom all over China from late March to late May, making it one of best times to pay the country a visit. Check out the bests places to view the cherry blossoms when travelling in China this spring!

6 Tips for Traveling with Children in Japan | Expert Travel Tips

Whether it’s your first time or your twentieth time, you never know what to expect on vacation with those lovable scamps! With its reputation as a safe country and its well-organized public transportation, Japan is already an ideal place to spend quality time with your family. Nonetheless, our travel experts compiled a list of tips to make your Japan Family Adventure with children a total breeze.